Ever fancied taking a trip to the planet Mars? On Planet Four (http://www.planetfour.org) we’re asking everyone to help us find ‘fans’ on the Martian surface. Your classifications on this site will enable researchers to better understand the climate and surface of Mars. The images you see here are taken using a high-resolution camera in orbit around the Red Planet. We collect together everybody’s markings of objects on these images and average the result. This is a task that computers are not reliable at, but which humans are really good at. By crowdsourcing your efforts, we can produce data that will show us what is happening in these images.

HiRISE image is ~1 km across. Spiders and fans are visible.

Every winter Mars’ polar region is blanketed by a layer of frozen carbon dioxide (dry ice). In the Martian spring, this temporary polar cap warms back up and rapidly changes directly from ice to gas (a process called sublimation). This produces geyser-like eruptions through weak spots in the polar cap. Dust is trapped in these eruptions and is carried away by the wind where it then falls in a fan shape across the surface nearby – you can see these fans in the images on this page.

Over the winter the seasonal ice layer is transformed to translucent slab ice, which allows sunlight to penetrate to the ground below in the spring. The ground warms up causing the ice to sublimate from the bottom. This results in gas becoming trapped below the ice layer, under increasing pressure. When a crack or a rupture develops the gas flows out the opening. The escaping gas carries along loose material eroded from the ground. The gas and fine material flow up to the top of the ice layer and out into the ambient wind, as shown in the diagram above. The material lands on top of the seasonal ice layer, downwind of the vent, in fan-shaped deposits. After the seasonal ice layer is gone the fans blend back into the surface material and are no longer visible.

This same activity occurs every spring, and slowly erodes channels in the ground. Often the channels are radially organized, thus earning the colloquial name “spiders”, and more formally “araneiform.” Channels are wide and shallow, generally less than 2 meters deep. In the winter the spiders are visible because the ice is draped over them; in the summer when the terrain is ice-free we see that the spiders are indeed channels carved into the surface, shown in the time-lapse sequence below. 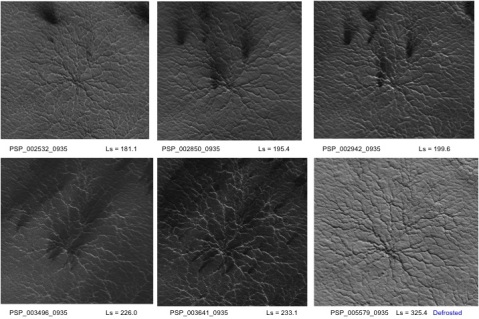 The fans are markers for the wind direction and speed at the time that the gas was escaping and carrying its load of entrained material. Sometimes the vents close and re-open and sometimes the wind changes direction, with the result that we see multiple fans from a single source region. This is all raw data that can be compared to predictions of models for Mars’ atmospheric dynamics, known as global circulation models (GCMs). Sometimes when the conditions are just right the gas will condense into fresh frost particles and form bright fans.

We hope to share more about the background to this project via this blog. Meanwhile, why not go and find some fans? Visit http://www.planetfour.org to start classifying.