A year on Earth is 365.25 days, but it takes Mars nearly twice as long to complete one revolution around the Sun. With 668.6 sols (a sol is a Martian day), how do scientists keep track of the Martian time and date?

A Martian sol happens to be 39 minutes and 35 seconds  longer than Earth’s. Dating back to the days of the Viking landers, sols are kept on a 24 hour clock. With the extra 40 minutes, Martian hours, minutes and seconds are slightly longer than their Earthly counterparts. That can make it a bit difficult to have a Mars time wrist watch.

The Martian calendar is not broken up into months like we have on Earth. Instead planetary scientists use the position of Mars in its orbit to tell time and mark seasons. They use the solar longitude L_s (pronounced “L sub S”) which is the Mars-Sun angle to keep track of the year.  L_s=0 degrees is when Mars is at the northern vernal (Spring) equinox.  L_s=90 degrees when at the Northern Summer Solstice) 180 degrees at the  Northern Autumnal Equinox and 270 degrees at the Northern Winter Solstice. Just think the opposite to get the specific season for Mars’s Southern Hemisphere. 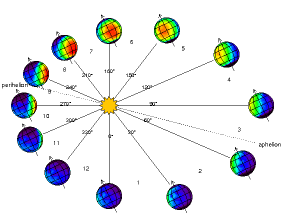 You can find out more about the Martian Calendar and the dates of future solstices with this  post by the Planetary Society.