Today we have the next installment of our Meet the Planet Four Team series, featuring Michael Aye from the Science Team.

I am from Germany, where I grew up approx 100 km northwest of Hamburg, near the North Sea.

I developed a calibration system for the photo-multiplier based cameras of the ground-based high energy gamma-ray telescope system H.E.S.S. This system was based on using nano-second short UV-laser pulses fluorescing a scintillator material and transporting that broader-band light through 50 m of fiber cables and have all this remote controllable. I finished up with installing and operating a LIDAR and radiometer to monitor the atmosphere status as required to cross-calibrate the observed gamma-ray flashes from the particle showers in the atmosphere.

Mars and Venus are the closest siblings of Earth and to understand their differences makes us understand Earth better (but I don’t like the multitude of Venusian chemistry that much.. yet 😉 The lack of water on Mars really makes it a great lab for studying the interface between the surface and atmosphere because on Earth most of what we see is dominated by water-based erosion. On Mars, it’s the wind and amazing CO2 sublimation effects.

I don’t have much time for reading anymore, but when I did, these books were big fun:

“Get lucky” by Daft Punk

I wouldn’t be able to pick really favorites, but among them are Margaritas on hot days, Caipirinhas and Mojitos. And since my 4 year stay in good ol’ England, I really am loving ales of all kind.

A Summary of a P4 Summer

At the end of August, Chuhong Mai  presented a summary and results from her undergrad summer research internship at the Institute of Astronomy Astrophysics, Academia Sinica working with Meg on Planet Four. You can learn more about Chuhong here.

Chuhong spent July and August in Taiwan working on map projecting HiRISE images and exploring frost features. She kindly agreed to share her final presentation talk slides (see below) and some text to describe each slide. Thanks Chuhong for all your help this Summer! 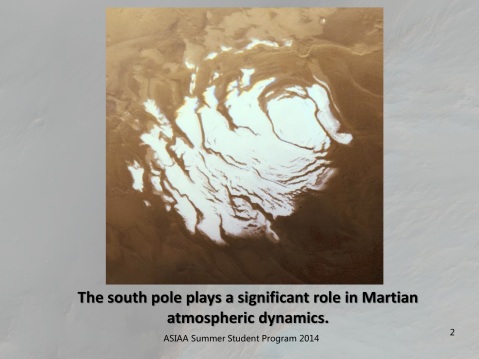 Mars has a very thin atmosphere, 96% of which is . Every year, the two poles of Mars participate in the gas exchange of atmosphere. Since the south pole contains a lot of , it plays an significant role in Martian atmospheric dynamics.

But what’s really interesting is we observe fans and blotches appear in early spring and disappear in summer each year on the south pole. Araneiform features or ‘spiders’, which are radial channels that converge in the center, often accompany those dark stuff. 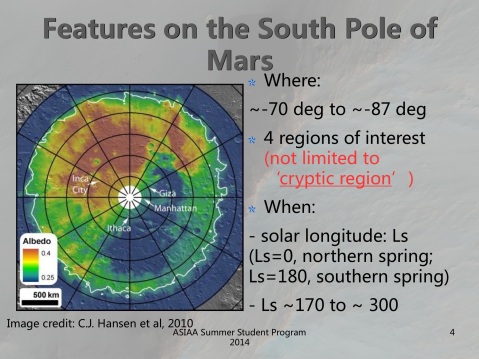 These features are everywhere from -70 to -87 deg. and not limited to the ‘cryptic region’ (low temperature because of dry ice, low albedo caused by translucent ice layer) as thought before. We use solar longitude (Ls) to measure time on Mars, these features appear from Ls 170 to Ls 300 typically.

The basic idea of the formation of fans and blotches:

The gas beneath the ice layer might carve the Mars surface and form ‘spiders’.

With local wind, the deposits look like fans with orientation that can indicate the direction of wind. Without wind to blow down the material, the deposits become blotches.

We now have a powerful instrument to study such features. The HiRISE camera on MRO has resolution as high as 0.25m per pixel and excellent SNR (100:1). So we can study sub-meter objects like boulders on Mars. It’s able to observe same locations at different time and thus show the evolution of the south pole. It has finished 4 seasons of observation. Season is 2006-2007, season 2 is 2008-2009, etc.

This schematic show you what the focal plane of HIRISE is like. There are 10 RED CCDs, 2 NIR, 2 BG. So color images can be obtained in the middle of the focal plane. Note that there are overlaps between every 2 CCDs.

Though we have large amount of data from HiRISE, computers are bad at recognize the features in it. Thus we invite citizens on Earth to help marking them on Planet Four. It is a project under Zooniverse. Users can use the tools in the classification interface to mark features’ sources and orientation. 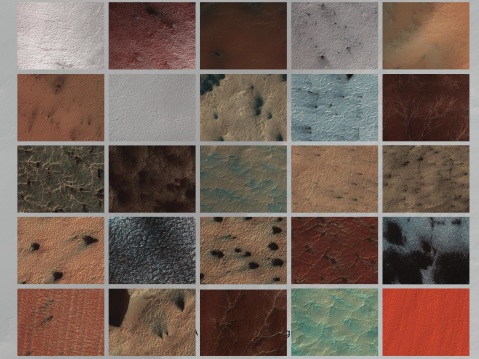 Some examples of cutouts on Planet Four. 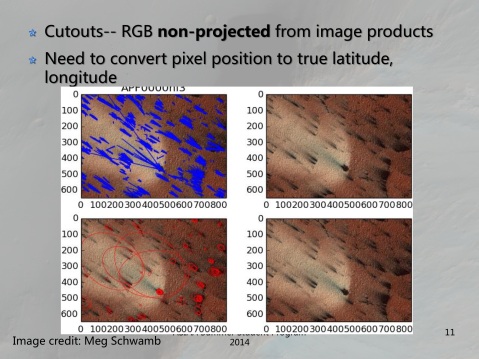 The cutouts are made from RGB, non-projected HiRISE products. Most people are able to make reasonable markings, and the clusters of people’s markings are recorded as pixel position. So we need to convert pixel position to latitude & longitude 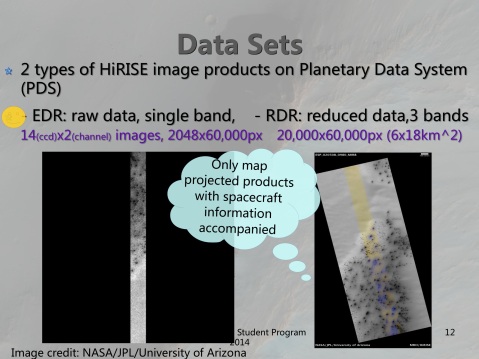 We have 2 types of data but we only use the raw data (EDR). Only map projected products of Reduced data (RDR) have spacecraft information with them. As we actually need position information of non-projected products (they are where the Planet Four cutouts come from), we decided to reassemble mosaics using raw data. 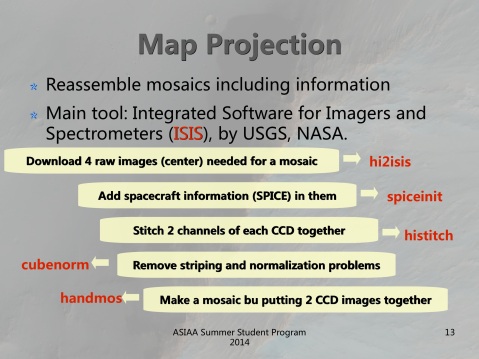 The tool we used, ISIS, is a free, specialized, digital image processing software package developed by the USGS for NASA. It is able to process data from NASA and International spacecraft missions including HiRISE. With applications in ISIS, we could follow the whole process presented here.

The schematic of the reduction process. We developed a pipeline of it.

Now, we are able to grab position information of any point. By getting the central points of HiRISE images, we have the distribution of them in a polar view. By drawing the images’ outlines, we show the overlap of different HiRISE images, which were taken at different periods. Study on a point in the overlap region will give the time evolution of it. 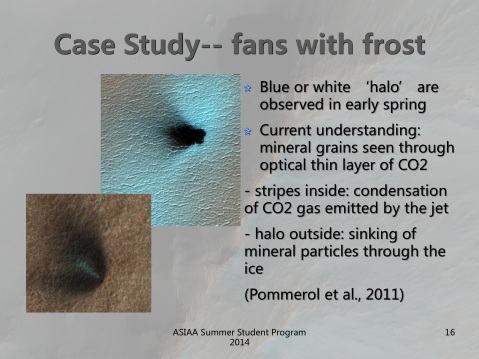 We can use these data to study fans with frost, which are common in early spring. The latest hypothesis is that the blue color is caused by a change in the structure of the ice caused the the fan particles sinking into the ice.  Yet there is little evidence of it. 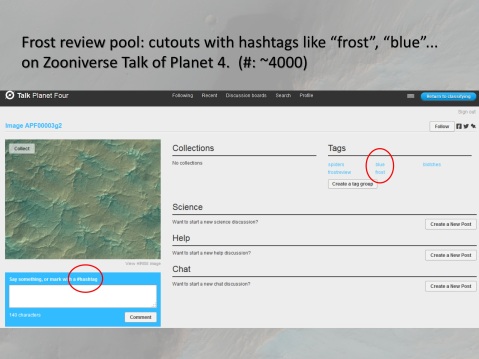 Firstly we need to review certain amount of cutouts with frost in it. The review pool is the cutouts tagged as ‘frost’ or ‘blue’… in Planet Four Talk. Though they are not all the cutouts with frost, but there are still a large amount and might contribute to revealing secrets of frost fans.

While reviewing, we classified these frost fans, as shown in slides (18-20) 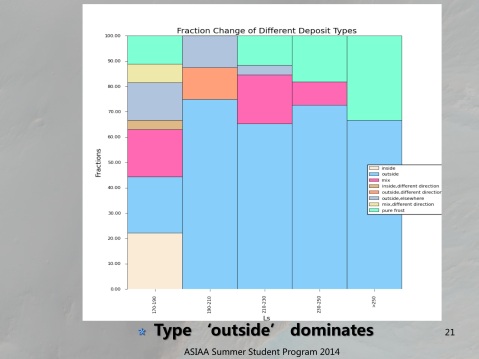 By dividing them into different periods of time, we study how the fraction of each types change over time. It can be seen clearly that type ‘outside’ dominate all the time.

Next, we combined several types of frost fans together and took a clearer look at how the locations of frost relative to fans change. We found that frosts only appear very early and then nearly all of them become outside of fans later.

Another combining shows that frosts mainly lie in the same direction of fans, some in different directions appear early at the beginning.

I picked 6 points of the 4 regions of interest for detailed study.

Only point B is presented since it has beautiful overlap. The table shows how the type of frost fans changes over time. Font color represents the typical color of frost or fans at corresponding time.

This series of pictures are of the same region. At the very beginning, nothing’s there. Gradually, we can see some dark blue stuff appear around the vents. They then expand to the outside and become bright blue. After that they begin to disappear, and the whole surface becomes white soon, with dark cores left

Another series show the similar process. Actually, we observe such process not just in B region. So we might have a general idea of frost evolution, as the slide shows. Interesting ‘dark rings’ are observed after frosts disappear in some places. It is the first time we see such features.

This slide concludes my work in summer and work might do in the near future.

And the winner is….

A month ago, we asked for your help to decide which bit of the Martian South Pole  (Inca City, Ithaca, or Manhattan) the world would see first to mark the start of the new season of  HiRISE‘s  South Pole monitoring campaign. A big thank you to everyone who voted in the Season 5 Sneak Peek vote,  and many thanks to the HiRISE team and the Zooniverse team for their help as well.

The votes have been tallied and we have a winner. The winner is….

The breakdown in votes can be found below:

Inca City was the most popular choice. Inca City is known for its boulders. It will be exciting to see if there are already fans by the boulders after the early days of sunlight when the first HiRISE monitoring campaign image gets taken. Once the first observation of Inca City has been acquired and processed by the HiRISE team, it will be made ready for public release. We’ll let you know on the blog as soon as the Inca City observation has been made public.

This image is just a sneak peak of what is to come. We will have all of the South Pole Season 5 monitoring images to look forward to in the future on Planet Four, but in meantime while we wait for the Inca City’s first image, if you have some spare time today, mark seasonal fans and blotches to help us better understand the Martian climate at http://www.planetfour.org