Today, June 18 at about 6pm UTC Mars completes yet another turn around the Sun and its calendar starts with brand new year 33 at Ls=0°!

You might remember that the last New Martian Year was at Earth’s date July 31,  2013. The shift to June 18 is due to the difference of Martian and Earth year length: the Mars year is 687 Earth days, meaning it’s 43 days shorter than 2 Earth years.

New Year on Mars starts with the spring equinox in the northern hemisphere. This means it is fall right now in the southern hemisphere in the areas that you are analyzing. All the ice from previous winter is long gone by now, the surfaces are inactive. The times of darkness become longer and longer and soon come long winter nights. At some locations there will be polar nights, when the Sun stays below the horizon for more than a day. These times are cold and CO2 will start to condense on the surface. First in some record-cold shadowed places and then all over southern polar areas. And it might even snow CO2 flakes!

I leave you with this simulated Martian analemma – the image of the Sun in the Martian sky taken at the same local time during the whole Martian year. Slightly less bright, the simulated Sun is only about two thirds the size as seen from Earth, while the Martian dust, responsible for the reddish sky of Mars, also scatters some blue light around the solar disk. On Earth an analemma is a figure-8, while on Mars it is a tear-drop because of a different relationship between orbit eccentricity and its rotational axis tilt than on Earth (see this excellent blog post by Ethan Siegel explaining analemma details). 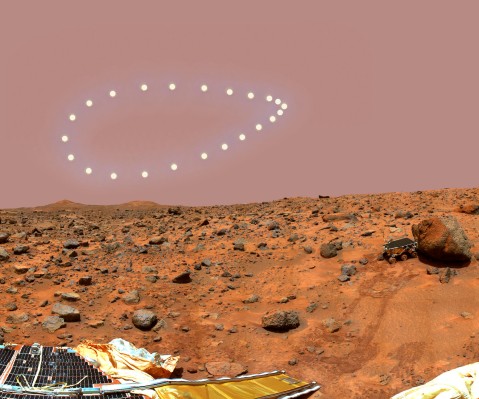 Right now the Sun on Mars is near the middle of this teardrop and moving towards the narrower tip. In about 1 Earth year the spring will come to Southern hemisphere and the southern polar activity will start again, new fans and blotches will appear giving us more data to investigate!

Thank you for helping us with this investigation!

Let us celebrate by classifying an image or two! Happy New Year!