The surface area of Mars is almost the same as the area of all of the continents on Earth. Only a tiny fraction of these vast, untouched lands have been explored by rovers. Of the rest, much of it has still never been seen up close by human eyes. Today we’ve launched  Planet Four: Ridges, and we are asking for your help to explore a particularly interesting part of the Red Planet. The goal is to find polygonal ridge networks, which are intersecting lattices of thin ridges enclosing polygonal shapes. 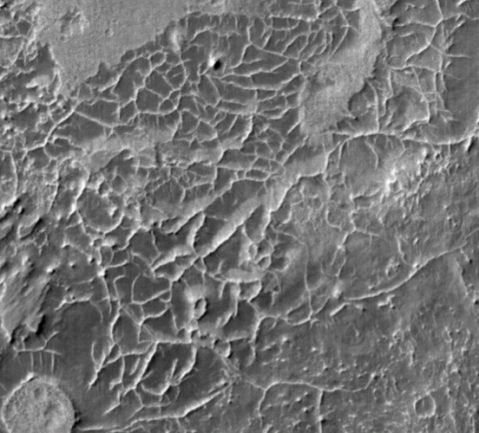 A polygonal ridge network in the eastern Arabia Terra region of Mars. This image shows an area about 4 kilometers across

Some of these ridges can be up to 50 meters tall, and from the surface would appear like the ramparts of an enormous fortress. Networks of ridges are usually formed via the filling of fracture networks either with lava, wind-blown sediment, or mineral deposits from circulating ground waters. These fractures are then transformed into ridges as the softer units around them get eroded by the wind. Your classifications on this site will help researchers find these networks and compare them to distributions of other features, such as mineral signatures, ancient valley networks, and dried up lakes. The images you see here are taken using the mid-resolution (6 meter per pixel) Context Camera (CTX) in orbit around Mars. Each participant views portion of images and decides whether or not there is a polygonal ridge network in the frame. We collect together everyone’s views on each image and this helps us find new ridge networks to study. The ridge networks can be subtle, but human eyes are well suited for pattern-finding, which is why we rely on you over computer algorithms.

More than 3.5 billion years ago, the climate of Mars was much different than it is today. The surface of Mars shows evidence for hundreds of lakes, and thousands of kilometers of flowing rivers. During this time and earlier, warm groundwater may have circulated in the Martian subsurface, potentially providing a protected home for early Martian life. One piece of evidence for groundwater during this period is the presence of clays that are deep in the crust (often visible in the central peaks of impact craters). Another is the presence of mineral veins, which are formed when warm water carrying elements in solution deposits minerals on the walls of fractures. Hot water or steam can also alter wall rocks of fractures, causing the walls to harden compared with the surrounding material. Later, after the crack cools, the minerals become harder than the rock types that surround them, so that as the surrounding unit get eroded by the wind, what was originally a fracture becomes a ridge. 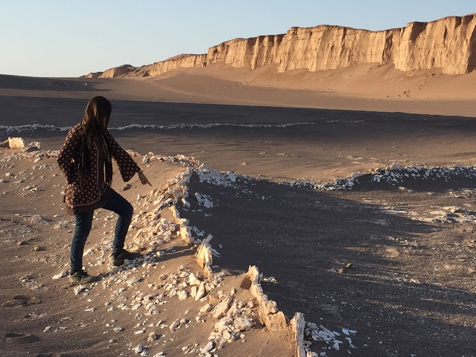 A ridge network filled with the mineral gypsum located in the Lut Desert of Iran, one of the world’s hottest and most lifeless deserts

A close-up of a Lut Desert gypsum ridge

Not all polygonal ridge networks are formed due to circulating groundwater, however. Sometimes open cracks on the surface get filled with windblown dust and sand, and that part gets preserved. Lava can also fill up cracks, either as it rises through the subsurface as magma, or if it is flowing along and drips into a fracture network. Finding all of the ridge networks on Mars helps us untangle which networks were formed by which process, all the while learning more about the intriguing wetter period in Mars’ history. This project focuses on the Eastern Arabia Terra region of Mars, where several ridge networks suggestive of mineral veins have been found.

A crack that has been hardened by hot steam escaping. It has since been brought into relief by the erosion of the surrounding rock. Campo de Piedra Pomez, Argentina.

As the project continues, we hope to share more background information on these interesting features here on this blog. Meanwhile, why not go find some ridge networks? Visit http://ridges.planetfour.org to start looking.