Perusing Planet Four: Ridges Talk I came across the image below. I thought I’d say more about it in case you encounter similar types of images. What drew my eye was the large diffuse lighter streaker on the one side of the crater. 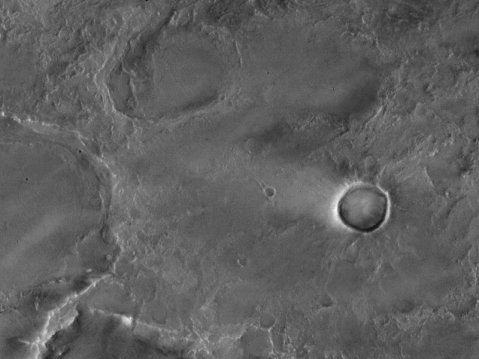 That’s called a wind streak. Wind streaks have been found not only on Mars but also on Venus and Earth.  As their name implies, they are formed directly by the interactions of the surface wind with the soil. The wind is impacted by obstacles in its path on the surface like crater rims. As the wind moves around the crater rim either picks up dust particles pushing them together collecting them to create bright streaks visible from orbit or the wind  excavates material exposing a darker material than the surrounding top surface layer.  Wind streaks extend into into the direction the wind is moving towards, so they are also good indicators of past wind direction.