More progress on the blotch clustering

I’ve been reviewing output from the blotch clustering with updated parameters, and the good news is the two problematic cases we were trying to have the clustering algorithm identify now are successful:

We’re looking a bunch of parameters, but the bottom left corner configuration is the parameters we think are best for the blotches and and fans.

Here we are showing just the clustering of the fan markings.

Here we are showing just the clustering of the blotch markings 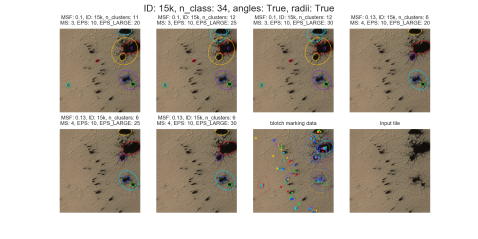 Here we show the clustering of the blotch markings. Now the 2-scale  blotch clustering identifies the volunteer draft markings for the large blotch below as well as smaller ones.

I think we’re at the point of locking development of the blotch pipeline. This will be a big step forward towards finishing the first paper and getting science results out of Planet Four.  We’ll want to take a look at the next stage of the pipeline after two different types of markings are cluster and the algorithm picks the final shapes based on the number of classifiers who drew fans versus blotches for the same source. If that looks good as we expect it should from previous reviews of the pipeline output, then the next thing we need to do is look at the pipeline results near the edges of each of the cutouts where this is overlap between the different subject images.