We’ve started to look into what’s the best wave to deal with this. The main reason we have the overlapping regions between adjacent Planet Four subject images is to make sure we identify seasonal fans that would get cut off between the two subject images if there was no overlap. The overlap should ensure at least one of the subject images has full view of the source, so we don’t miss anything.

Here’s an example of four adjacent subject images combined and the clustered markings drawn on.

You can see that in the current catalog we  get two overlapping blotches with slightly different orientations and centers generated from combining the volunteer classifications. If you look at what is in our catalog for each subject image that makes up the ensemble, you see that for one of the subject images the  blotch is only partially on the image. The resulting blotch marker from the combined classifications is also partially on the image, it extends beyond. We might be able to use this fact that people extended the drawing markings to fit the shape if the source went over the edge,  to identify those seasonal fans and sources that extend beyond the extend of the subject image and when that happens use the catalog entry from the overlapping subject images where the source was fully in the subject image. We’re testing this hypothesis by performing a manual review in the next week or so of the catalog output of a sample of overlap regions. 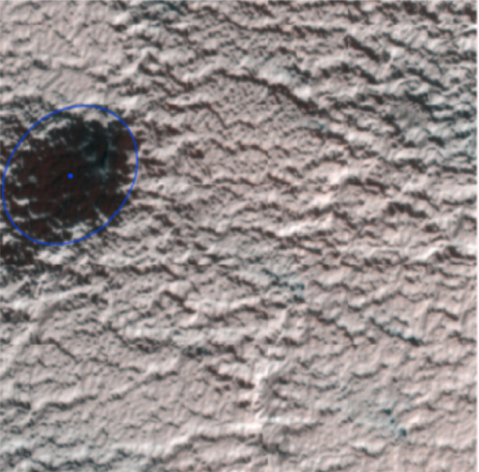