I’m pleased to announce that our first scientific paper for Planet Four: Terrains  was accepted to the journal Icarus.  Below is a snapshot from the top of the paper manuscript, and the paper is publicly available via the free preprint we’ve put online here. 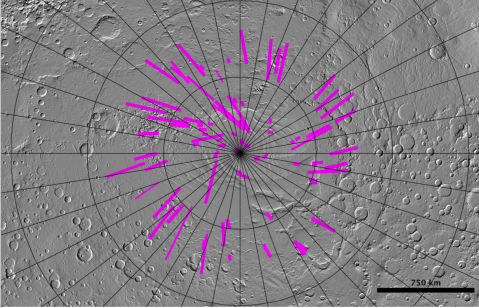 Footprint of CTX image searched by Planet Four: Terrains for the first paper

Applying a weighting scheme, we combine classifications together to identify spiders and swiss cheese terrain. The weighting scheme isn’t testing anyone, but it helps us find more spiders by allowing us to pay slightly more attention to those that are better at identifying spiders and help increase the overall detection efficiency of the project. Details can be found in the paper.

CTX side view of the SPLD

To confirm these identifications were real, we needed HiRISE imaging.  CTX has a resolution of 6-8 m/pixel. HiRISE can resolve up to a coffee table on Mars with a resolving power of 30 cm/pixel. With HiRISE we could see the wiggly dendritic nature of the channels and as well see seasonal fans to confirm that these form via the carbon dioxide jet process.  8 areas outside of the SPLD were targeted last Summer and Fall by HiRISE.

Below are just a few examples of the HiRISE subframes of these regions off the SPLD:

There be spiders! Araneiform channels can clearly be seen in the images above. The HiRiSE images confirm the spider/araneiform identification. We also see seasonal fan activity as well. For the first time we have found spiders/araneiforms outside of the SPLD!

This result is exciting. For some of these areas we have sequences with HiRISE taken over time which we hope we can put it into Planet Four to measure how the fans sizes and appearance are different from their counterparts on the SPLD. Now we get a chance to study how these locales off the SPLD are similar or differ from the SPLD and try to learn why these areas and not others have spider channels.

We’ve only searched a small fraction of the Martian South Polar region. We have more images on the site to expand the search area to see where else spiders/araneiforms may be. Help us today by classifying an image or two at http://terrains.planetfour.org