An Update on Planet Four: Ridges

Today we have a guest blog by JPL research scientist Laura Kerber, one of  our lead researchers on Planet Four: Ridges .  Laura studies  physical volcanology, aeolian geomorphology, wind over complex surfaces, and the ancient Martian climate.

Thanks to you, we have mapped ridges all over Nili Fossae and Nilosyrtis Mensae!!

As you might remember, our ultimate goal was to determine the distribution of ridges so that we could see if they were correlated with any other types of interesting features, like valley networks, clay or chlorite detections, or even just with the dichotomy boundary itself, which could have aligned with the edge of an ancient ocean. Since I have found polygonal ridge networks in other places near the dichotomy boundary, I was thinking that there might be a relationship between the hypothetical ancient ocean and the ridge networks. Indeed, there are many polygonal networks in shallow marine environments on the Earth, thought to be due to shrinking that happens when water is forced out of clay layers as they are pressed. Thanks to your efforts, we discovered that the Nili ridges are very localized along the dichotomy boundary, crowded into Nilosyrtis Mensae, Nili Fossae, and Antoniadi crater, but missing in Protonilus Mensae and further west along the dichotomy boundary. These means that something special must have been going on close to Nili Fossae. It could be that the ridges were only forming in this region, or perhaps we see a deeper exposure of the subsurface here, which allows the ridges to be exposed. One intriguing possibility is that the presence of the ridges is related to the availability of carbonate, which is a common ridge-forming substance in some terrestrial deserts (in the form of the mineral calcite). The Nili Fossae region is one of the only regions on Mars where lots of evidence for carbonate minerals has been found. Perhaps ground water circulation through fractures was happening all across Mars, but only in the area where there was CaCO3 in the water could the mineralization of these fractures take place. WE DON’T KNOW!

The next step for us to take is to study all of the great examples that you have found and to tie them to their geological context, both in terms of where they are with respect to the dichotomy boundary, but also how they relate to #darklines, glaciers, and other interesting things in the area. (I think I’ve seen enough of the area by now to say that they don’t seem to be related to glaciers).

I have been working with Meg over the last couple of weeks to get all of the data that you have collected into a usable format so that we can start to write the paper. The actual writing process will take a number of months.

Meanwhile, we decided to expand our search to a slightly different part of the Arabia region—Meridiani Planum.

Here is a map showing roughly where we have been looking (jagged gray area with a black background) in the context of the broader Arabia area. Arabia is an interesting place because it is very dusty (making it hard to see what minerals are there) and it has an unusual chemical signature (it has elevated hydrogen compared to other nearby places). The white area is where I have previously found ridges in Meridiani Planum (and the center of where we will be looking next).

If you think you spy a crater whose name sounds familiar, it could be because we’re getting closer to the territory that Mark Watney traversed in Andy Weir’s The Martian.

[Spoiler Alert]: In the book, Mark Watney has to traverse from the northern plains through Mawrth Valles (another popular landing site candidate!) to get to Schiaparelli Crater. You can chart his course here on this cool fan-made website: http://www.cannonade.net/mars.php#map

In 2004, the Opportunity Rover landed in Meridiani Planum. Its landing site was a wide, flat plain. In the 13 years since its landing, Opportunity has made some amazing discoveries, including the discovery of sedimentary rocks emplaced and modified by water, evidence that Opportunity’s landing site was close to the shoreline of an ancient, salty, shallow body of water. To the north of Opportunity’s landing site, Meridiani Planum becomes much less “plain-like”. Instead, it devolves into a tangle of arcuate, intersecting ridges.  While it would be a nightmare for a small rover (or Mark Watney) to traverse, this kind of bizarre geomorphology is fascinating from a geological point of view. In particular, these ridge patterns are similar in shape and morphology to some of those shallow marine polygonal networks that I was looking for along the dichotomy boundary. On Earth, one such polygonal network can be seen an ancient shallow marine environment now exposed in Egypt’s white desert. The desert is white because of the expose chalk formations, and the entire area is criss-crossed with veins full of calcite and hematite. 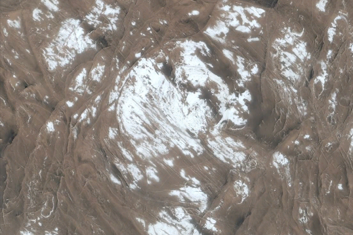 The Meridiani ridges are similar to the ridges that we have been finding so far in that they are intersecting, but those of you who have been with the project for a while will see immediately how different they look. 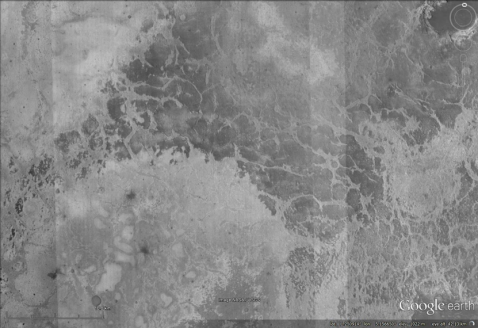 While the Nili ridges were rather narrow, discrete, angular, and polygonal, the Merdiani ridges are feathered, arcuate, varying in width, and flat-topped. They also seem to merge together in multiple areas, like in this image, where there seems to discrete ridges but also amalgamations of ridges that form a kind of mesa.

The other strange thing about the Meridiani ridges is that they are not always the same color. For the most part, the ridge-forming unit is white and the background plain is dark, but sometimes it looks like the opposite, as in the above image.

We will keep you updated as work progresses on the first paper. Meanwhile, we will work on getting you some images of Meridiani Planum to map!

If you are bored while you are waiting, try looking along the dichotomy boundary the other direction… around the Isidis Basin and into Nepenthes Mensae. Maybe the ridges appear on either side of the Isidis Basin, and represent circulation of groundwater caused by the remnant heat of the Isidis impact……