Southern Spring is coming to Mars very soon. May 22nd marks the official start of Spring at the Martian South Pole. We’ve been busy reducing the most recent sets of classifications from Planet Four: Terrains looking for new spider locales to target when the HiRISE and CaSSIS seasonal campaign starts. The CaSSIS camera is a recent addition to Mars, aboard the European ExoMars Trace Gas Orbiter (TGO). It takes slightly higher resolution images than the CTX, whose images we show on the Planet Four: Terrains website. CaSSIS is designed for  stereo imaging which is key for measuring depths and heights of features. Also unlike CTX, CaSSIS is equipped with several filters so color images can be made. Even with the addition of CaSSIS,  the decade old HiRISE remains the highest resolution imager  (~30 cm/pixel) in action around the Red Planet.

The PI of Planet Four: Terrains, Candy Hansen is a member of the HiRISE and CaSSIS science teams , and can ask for images to be potentially taken of the Solar Polar region if we find something interesting worthy of followup observations. We’ve asked for a few additional candidate spider locations (plotted below between -70 and -75 degrees latitude) outside of the South Polar Layered Deposits to be imaged if the observations can be squeezed into these cameras’ packed schedules. If confirmed in the higher resolution images, these will be the furthest spider identifications from the South Pole. Fingers crossed we’ll get some more detailed images of these places over the coming months. 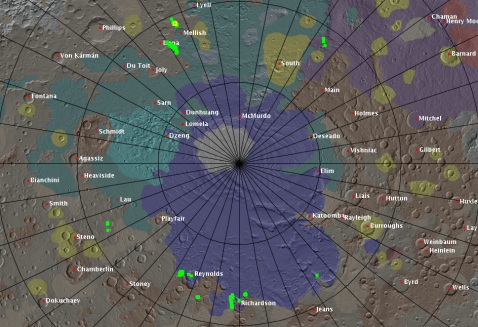 Thanks for all your help. We plan to have new images on the Planet Four: Terrains site by the start of Southern Spring, so stay tuned!