A Sneak Peek at the Future of Planet Four

The science team is working on migrating Planet Four to the Zooniverse’s more modern project builder (or panoptes) platform. This is a slow process because things are different in how the newer Zooniverse platform displays images and also we want to take the lessons we’ve learned over the past 6 years and use it to make the web interface even better.  We thought we’d share some screen shots from our work-in-progress prototype. 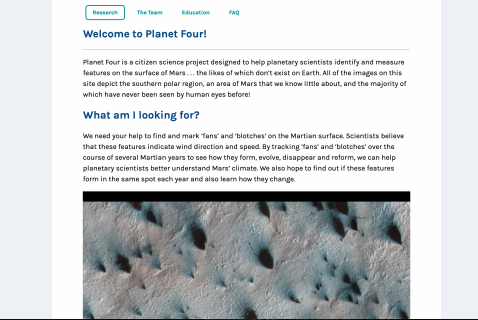 The next stage will be getting some images on the site and beta testing the changes we want to make and seeing how well these tweaks do compared to the current Planet Four website/classification interface. This might take a few months, but we’re working hard to have this ready before the end of the year.

In the meantime, we have new images on the original Planet Four website that we are hoping to get classified before the older Zooniverse platform that runs the current Planet Four site is officially retired. We’re trying to make the push in April to get these new images classified. If you can spare a few minutes to classify an image or two on the main Planet Four site, we’d appreciate it.