Where Exactly on Mars are the Terrains You’re Looking At?

The CTX images are of the South Pole, but you might be wondering where exactly we’re looking. One of the main aims of Planet Four: Terrains is to identify new areas of interest to point HiRISE, the higher resolution camera on Mars Reconnaissance Orbiter. CTX is named the Context Camera because it provides the larger picture or context for HiRISE’s detailed but narrow image swaths. Anya’s gone in to more detail about this, so check out her blog to learn more.

To find new areas of interest,  for Planet Four: Terrains we wanted to extend beyond the regions we know have spiders because they’ve been imaged by HiRISE during the seasonal processes campaign. To give you some sense, here are  the regions targeted by HiRISE that are currently uploaded in the Planet Four database. This compromises  all imaged locations from Seasons 1,2,3 and Manhattan Season 4 and Inca City Season 4 and a small part of 5. 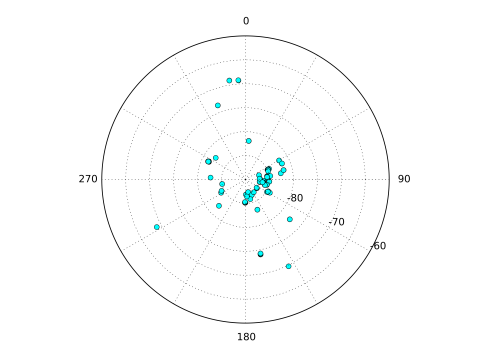 For picking the first set of CTX images, I went through and found what we think are ice free images from the end of Summer and early Fall, and selected as much of a random uniformly distributed sample south of -75 degree latitude. The reason we didn’t want ice if possible is that if there’s ice, there’s a chance for carbon dioxide  geysers and fans (the ones we ask you to mark on the original Planet Four). The fans would block you from seeing surface features in the ground below them.

Above are plotted the locations of the full frame CTX images used to make the  subframes that you see on Planet Four: Terrains (Note: we cut up the CTX images into 800 x 600, width x height,  pixel images). We currently have a random third of this set live on the site. We’ll be add the remaining subimages to the site over the next month or so.

For comparison, here again the previous HiRISE seasonal monitoring images locations uploaded on the original Planet Four, plotted on the same scale as the CTX plot above.

As you can see most of the HiRISE images from the seasonal monitoring campaign are focused south of -80 degrees. As you can see , we’re looking at much more of the Martian South Pole with Planet Four: Terrains.  Soon the South pole will be in darkness again, and the temporary carbon dioxide cap will start growing again. Our hope is that we can have these images reviewed before the start of the Spring on the South Pole to add new locations to the target list for Season 6 of the HiRISE monitoring campaign that starts around July 2016.

Check out Planet Four: Terrains, and classify an image or two today at http://terrains.planetfour.org

Why we need Planet Four: Terrains?

I want to talk why we created the new project Planet Four: Terrains if we have Planet Four already.

The very high resolution images of HiRISE camera are really impressive and one might think that there is no reason to use a camera with lower resolution anymore. Wrong!

First, high resolution of HiRISE image means large data volume. To store on-board and to download large data from MRO spacecraft to Earth is slow (and expensive) and this means we are always limited in the number of images HiRISE can take. We will never cover the whole surface of Mars with the best HiRISE images. Sadly. so we use different cameras for it. Some – with very rough resolution and some – intermediate, like context camera (CTX). We can use CTX, for example, to gain statistics on how often one or the other terrain type appears in the polar areas. This is one point why Planet Four: Terrains is important.

Second, because HiRISE is used for targeted observations, we need to know where to point it! And we better find interesting locations to study. We can not say “let’s just image every location in the polar regions!” not only for the reason 1 above, but also because we work in a team of scientists and each of them has own interests and surely would like his/her targets to be imaged as well. We should be able to prove to our colleagues that the locations we choose are truly interesting. To show a low-resolution image and point to an unresolved interesting terrain is one of the best ways to do that. And then, when we get to see more details we will see if it is an active area and if we need to monitor it during different seasons.

Today we have a post by Dr. Candice (Candy) Hansen, principal investigator (PI) of Planet Four and Planet Four: Terrains. Dr. Hansen also serves as the Deputy Principal Investigator for HiRISE (the camera providing the images of spiders, fans, and blotches seen on the site). She is also a Co-Investigator on the Ultraviolet Imaging Spectrograph on the Cassini spacecraft in orbit around Saturn. Additionally she is a  member of the science team for the Juno mission to Jupiter. Dr. Hansen is responsible for the development and operation of  JunoCam, an outreach camera that will involve the public in planning images of Jupiter.

My first glimpse of a “spider” on Mars was in 1998. The Mars Global Surveyor (MGS) had gone into orbit around Mars, and winter was turning to spring in the southern hemisphere. The Mars Polar Lander was en route to Mars, and we were anxiously waiting for polar night to lift so that we could see our landing site.

The Mars Observer Camera (MOC) onboard MGS started returning images just a few weeks before Mars Polar Lander (MPL) was due to arrive. We would scrutinize long rolls of film, and that was when we realized that the terrain was not exactly what we expected. Dark spidery forms and cracks that resembled caterpillars fascinated us. I was hooked on trying to understand these exotic features.

We now know that if the MPL made it safely as far as the surface it landed in very inhospitable terrain. We use the colloquial term “spiders” to describe an array of interconnected channels on the surface. The branching channels, now formally referred to as “araneiform” terrain, cover the surface where MPL was predicted to land.   They occur in a wide variety of morphologies, from isolated to connected to starburst to lace, with channels that are typically 0.5 – 2 m deep, and ~5m wide.

We never heard from MPL after it entered Mars’ atmosphere. Any number of things could have gone wrong. Or everything might have gone perfectly and it landed with one leg in a channel and simply tipped over.

Help  identify spiders and other araneiform terrain with Planet Four: Terrains at http://terrains.planetfour.org

We are excited to introduce to you a new companion citizen science project to Planet Four called “Planet Four: Terrains” built on the Zooniverse’s new platform. You have explored with us here in Planet Four some of the most detailed surface observations ever made in our solar system and many of you have acknowledged and wondered about all the other amazing features visible in these images that we did not ask to be studied, like spiders, networks of channels and weirdly looking craters. (some of you will remember that one of these even led to a re-observation of the same crater with the HiRISE camera).

It is an interesting fact that when one decides to make a camera that can resolve a lot of small details, that it will not be able to scan a lot of area. One has to decide, as long as we don’t have infinite data transport capabilities and infinite mission time at other planets and moons in the solar system. That’s why the Mars Reconnaissance Orbiter (MRO), the spacecraft that houses the HiRISE camera that produced all the images in the Planet Four project has a complementary camera system onboard to provide context, appropriately called CTX for ConTeXt camera. It has a lower resolution than HiRISE (approx 5-6 m compared to HiRISE’s 25 to 50 cm) but takes images from a far larger region than HiRISE.

So here is our idea: We confirmed that many of the features you were asking about are still recognizable with the lower resolution images of CTX. Therefore we would like your help in gathering spatial statistics in where around the south pole we can find which kind of patterns on the ground that are related to CO2 ice activities. Your help in classifying CTX data into a set of ground patterns will serve to decide where the HiRISE camera will be pointed next during 2016’s south polar spring season observation campaign. This way your contributions directly improve the scientific output of both CTX and the HiRISE camera and we are very excited to provide to you a way to point the highest resolution camera in the solar system to the most interesting areas of the Martian south pole!

You can find the new project, a more detailed science case description and an awesome spotter’s guide at this address: http://terrains.planetfour.org

Thanks as always for your time and your enthusiasm!